Plug and Touch - Turning your TV into a touchscreen

On show at Nokia World 2010 were several exciting examples of future technology. One of those was a research project brought from Nokia's Beijing research and development labs. Named "Plug and Touch", it's an application which can turn any type of visual display (TV or projector) into a Symbian-powered touch screen display. Click through to read our commentary and see the demonstration video. 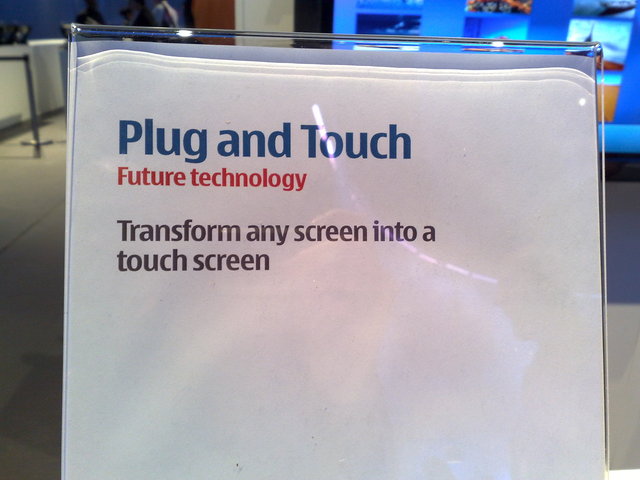 Every once in a while, a new innovation comes along that makes you stop and ask yourself - why didn't I think of that! This is definitely the case with Plug and Touch.

Plug and Touch supports S60 5th Edition (Symbian^1) and Symbian^3 phones and requires them to have TV out capability (a feature which is becoming increasingly academic to point out). Then the phone must be mounted in some sort of stand so that the phone can monitor its own screen output on the large screen, via its main camera. The display technology or connection type doesn't matter, you could use a TV or projector, connected via HDMI or AV cable; the device just needs a clear view of its output.

The software then monitors for changes in the image, e.g. as you place your finger over an on-screen button. It can understand a limited number of gestures, and translates and simulates them as finger tap events on the phone's screen. The phone then reacts accordingly, changing the image on the screen. Plug and touch understands short and long taps as supported in Symbian^3. For Symbian^1, it interprets long taps as a double screen tap; and finally, it supports scrolling too.

There are some intriguing social implications for this technology. First of all, it removes the need for complicated presentation technology for mobile workers. They can simply set up a presentation on their phone (the quick'n'dirty method would be to just create a photo gallery). Then, there is the case of underfunded schools that would benefit from having (the usually very expensive  - £5000 or so - interactive whiteboards. All that is needed is a sufficiently large screen, and a phone running Plug and Touch. Both of these scenarios provide a means of having a large interactive display with relatively low-cost equipment (especially if staff are already using compatible phones). If this becomes an official product, it could help a great many people.

When I asked the team, they weren't able to provide a time frame for when this would even arrive at Nokia Beta labs for public download. Also, it will be interesting to see how well the technology scales. E.g. using on a very large projection screen with a fine pointer, rather than a finger, or whether the technology could be adapted to follow a laser pointer instead of a human finger.

David Gilson for All About Symbian, 23rd September 2010

Filed: Home > Features > Plug and Touch - Turning your TV into a touchscreen